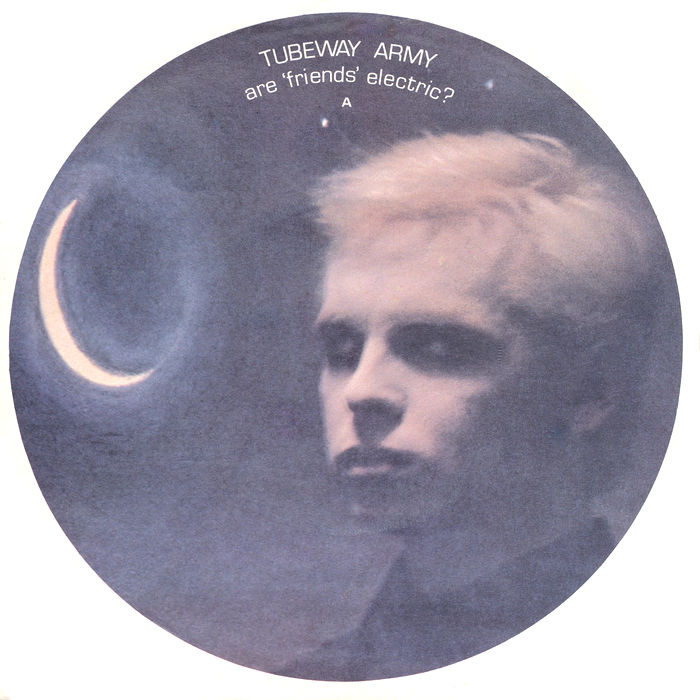 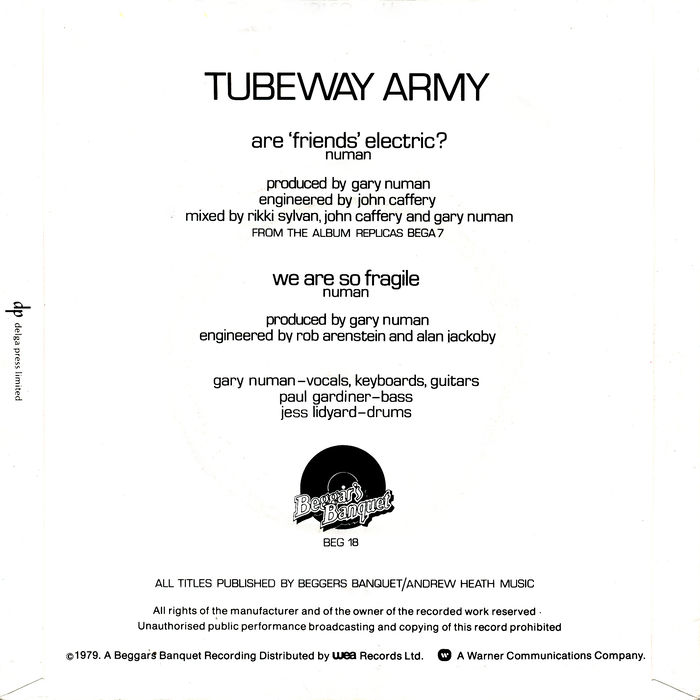 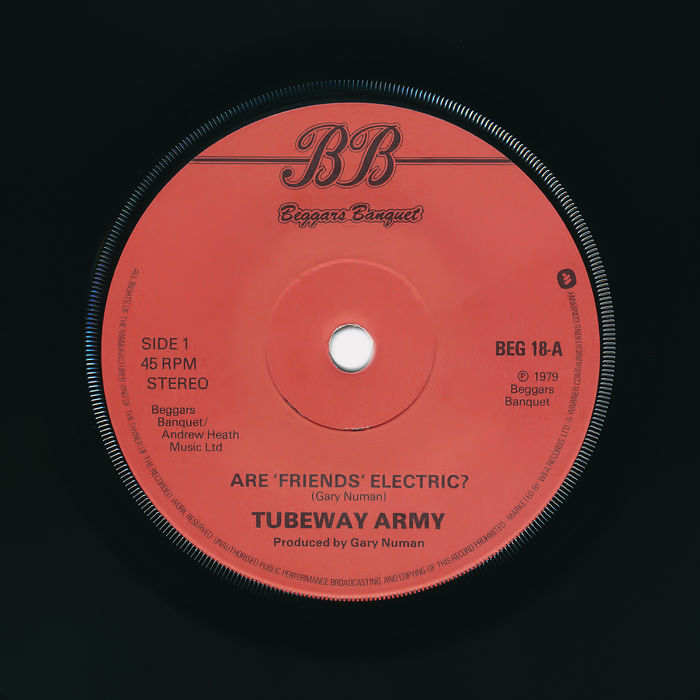 This roaring synthesiser symphony blew open the doors to a new decade and brought electronic music into popular consciousness in a similar way that God Save The Queen had shoved punk in the public's face two years earlier.

Influenced by the writings of science fiction authors such as Philip K. Dick and J. G. Ballard, its opening verses capture the mood of a dark dystopian future. A common theme to some of these stories is the difficulty in differentiating between the artificial and the real, and in particular how we might tell androids and humans apart. The real difference lies in the unique emotional richness of human experience, but the physical similarity – at least superficially – provides a new set of dilemmas. Written in an era when life-like sex robots were not even a nerd's wet dream, lead singer Gary Numan writes about an android 'friend' who calls round to provide sexual services, hence the use of quote marks in the title and the lines: "And I hate to ask but are 'friends' electric? Only mine's broke down. And now I have no one to love."

Ironically, the song's mix of analogue synthesizers and guitars is not typical of the synth pop it fuelled. The sound at the forefront of UK music in the early 1980s was better captured by contemporaneous tracks such as OMD's Electricity with its roots in German maestros Kraftwerk. Indeed, Numan's sound is instantly recognisable to this day, but it began by chance. "There was a Minimoog synthesizer in the corner of the control room and I was able to use it for two or three days," Numan explained in an interview. "I'd never seen one before… I didn't know anything about synthesizers. They were just a bunch of dials to me." But he was blown away when he heard the Moog's tremendous, foundations-shaking power - equivalent to "10 guitars playing at full volume with just one finger". Realising his punk songs would sound louder and stronger using synth, he hastily re-arranged them. "I didn't know it at the time, but I suppose I was trying to combine that electronic thing with the spikiness of punk," he added.

The sound was not the only unique aspect of Tubeway Army. On BBC's Top Of The Pops, the group appeared dressed in black and near-motionless. Numan in particular gave a startling and original performance "like an android", which he later claimed was a means of masking his stage-fright. Make-up artist Mary Vango remembered that Numan seemed unreachable, remote and emotionally disconnected, but not aloof. "He was terribly shy and couldn't make eye contact," she recalled. "We spent an entire day in the dressing room, and I don't remember a single bit of conversation."

Tubeway Army would be subsumed into the ego of its creator for future releases, of which Cars and We Are Glass are the standout singles. But 'Friends' is surely his most significant and best, rightly staying at the summit of the UK charts for four weeks during the summer of 1979, a year that represents the Premier Cru of popular music. Yet it is not even included in NME's best 45 singles of the year. We are delighted to correct this jaw-dropping oversight. This is a prescient song about android prostitution using the room-filling power of analogue synths that remains relevant and unique today. It was the future back in 1979 when synthesizers were something of a rarity, and on many levels it remains so decades later when they are ubiquitous. Surely the hallmark of a classic track.

We hereby instate Are 'Friends' Electric? by Tubeway Army on The Wall as No. 1 Best Single of 1979.

I remember being delighted when this knocked Ring My Bell off the top spot. Over the years I have come to appreciate this truly ground-breaking release. Same for the TOTP performance. A pivotal song in the development of electronic music.Dave B

*Written by: Gary Numan. Taken from the album "Replicas" 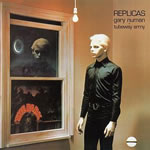