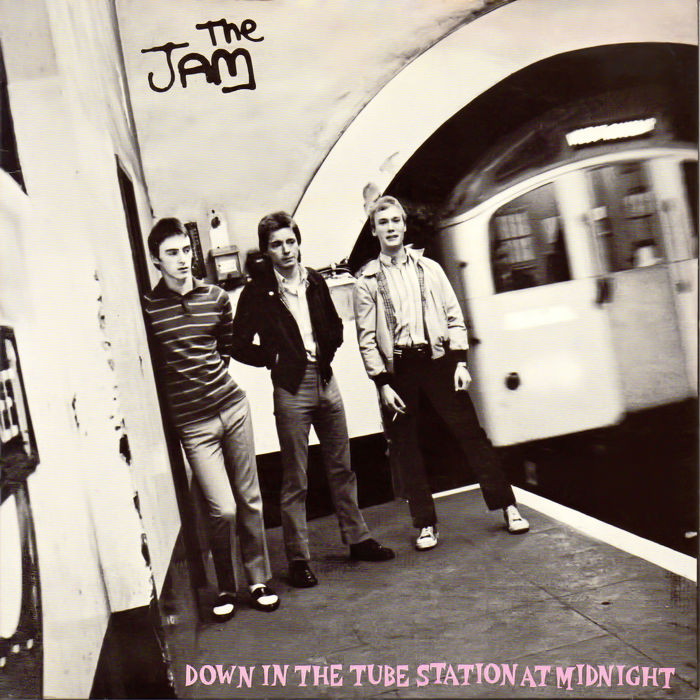 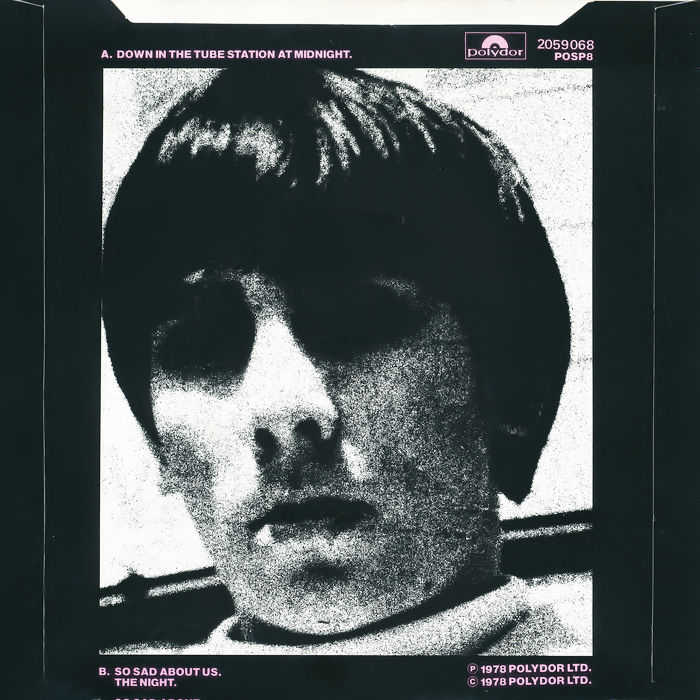 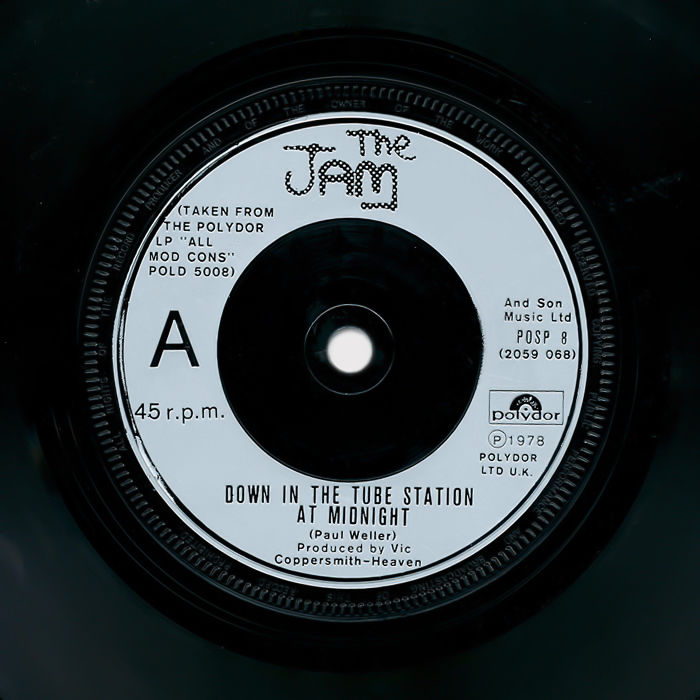 Down In The Tube Station At Midnight

Between November 1978 and March 1980, The Jam released five consecutive singles of such quality that only David Bowie and The Beatles can rival the run. The track that began one of the purplest patches in UK chart history was Down In The Tube Station At Midnight, a first-person narrative about a vicious mugging that leaves the victim losing consciousness and dying on a tube station platform. The lyric is noted for its atmospheric and poetic prose - "The glazed, dirty steps - repeat my own and reflect my thoughts Cold and uninviting, partially naked Except for toffee wrappers and this morning's paper." The attackers - "madman on the rampage" - have followed the victim into the tube station after he won some money on a slot machine.

As the victim lies on the cold platform, he sees the graffiti and decay of the tube station in stark contrast to the bright adverts promising holidays. With no one there to save him, the incongruity is further conveyed by the sight of "Jesus Saves graffiti painted by an atheist nutter" (although one has to suspend disbelief about how the victim could know the worldview of the graffiti artist). And there will be no one to help his wife, who may also be in danger because the attackers took his house keys.

The song starts with the sounds of an approaching tube train (recorded at St John's Wood underground station on the Jubilee line) before the pulsating bass kicks in over rapid hi-hat percussion. The sound of a heartbeat (in the left stereo channel) adds to tension during the quieter verses. As we reach the denouement with the victim left lying on the platform floor the guitar riff and Paul Weller's vocals become increasingly threatening. The whole song has an almost cinematic quality, as if you are in the tube station witnessing the brutal assault yourself.

"A lot my songs start as visual ideas and I see them in terms of little films in my head," Weller explained. "This is probably why a lot of them have conclusions. They're all essentially about me. Some I use characters in situations, and Tube Station is one of those. The original idea was to try and write a short TV play, only in a three minute context. The song came from my own neurosis, as a lot do, and the lyrics I wrote really quickly. At first they're written as a short story. I later split them up into lines and chopped bits out here and there. It's always amused me how the songs most people think of as my best were written so quickly."

The speed of composition is common to some of the greatest tracks; they are instinctive, spontaneous creations that pop into the head of the composer almost fully formed. Tube Station was one, and it showed Paul Weller to be an inspired songwriter, especially as he wasn't even 20 years old at the time. Perhaps the best accolade came from BBC Radio which imposed an airplay ban due its "disturbing nature"; further evidence of the song's impact on the listener.

The track was light years ahead of anything else The Jam had done to date. So was the album from which it was taken. All Mod Cons - with tracks like Billy Hunt, Mr Clean and To Be Someone - drew comparisons with Bruce Springsteen in the NME. Others saw that the Jam were playing "sixties music in the tradition of the Who, Kinks and The Beatles in a modern way". The Record Mirror rated as one of the best three albums of the year. There were some dissenting voices: Melody Maker gave a sneering review believing that Weller would have caught up with the mainstream by 1990. As if that was any worthwhile objective!

Weller believes this was the first true album from The Jam, "one where we found our sound and made us important. I felt this group has got to be taken seriously now, not just Who derivatives." Ironically, a Who song - So Sad About Us - was the B-side, but this was a tribute to their drummer Keith Moon, who had recently died (coincidentally at the same flat where Mama Cass had died four years previously and at the same age). The reverse sleeve featured a picture of the drummer.

Although there are many contenders for the best Jam single, Tube Station is arguably their masterpiece. If you're ever at a deserted station late at night, this song inevitably plays in your head; you even find yourself looking for "Jesus Saves" graffiti and discarded toffee wrappers.

We hereby instate Down At The Tube Station At Midnight by The Jam on The Wall as No. 1 Best Single of 1978.

When I heard this track and its incredible story telling, I realised that Paul Weller was head and shoulders above his peers. He may have drawn inspiration from his hero Ray Davies of The Kinks, but for me, Weller is an equal in such company.Dave B

*Written by: Paul Weller . Taken from the album "All Mod Cons" 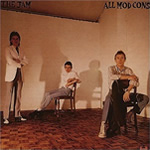