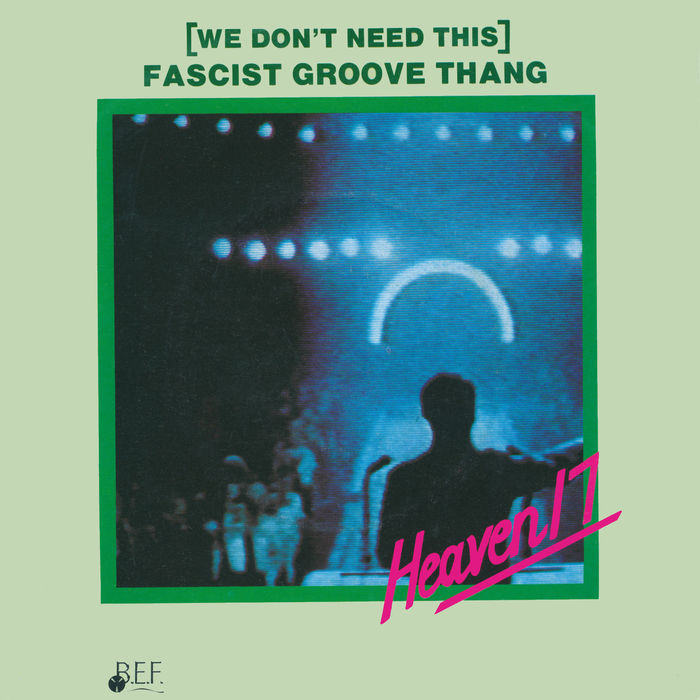 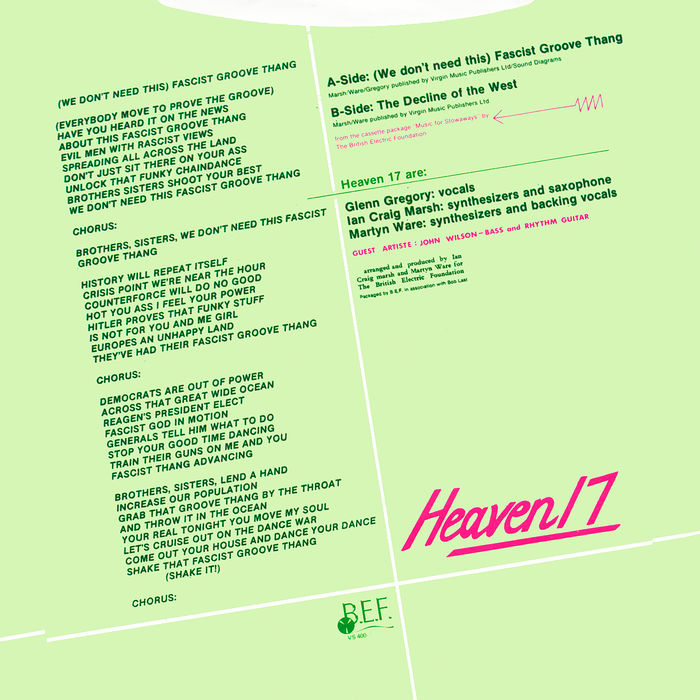 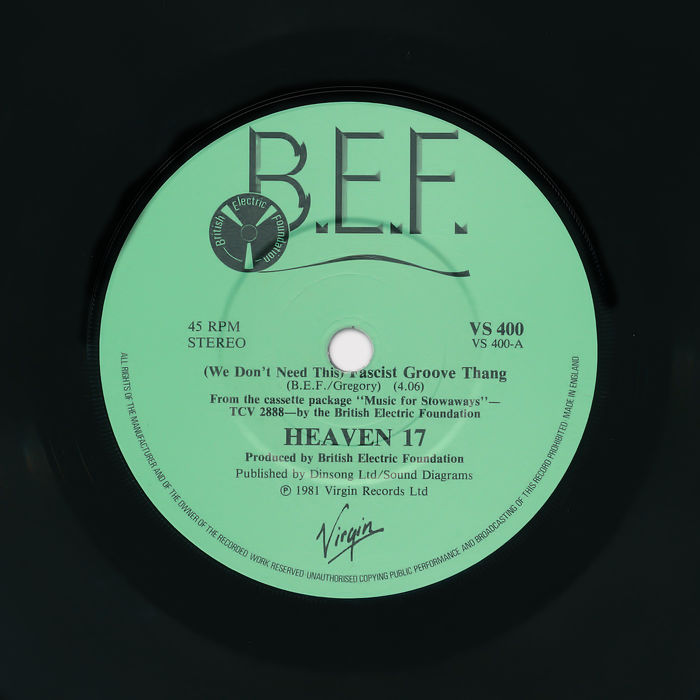 In November 1980, Ronald Reagan won the US Election, defeating the incumbent President Jimmy Carter in a landslide victory. During a bad-tempered campaign, Reagan pledged to increase defence expenditure and tighten other spending. His campaign slogan was "Let's Make America Great Again". Carter portrayed Reagan as a dangerous right-wing extremist, warning that welfare would be savagely cut.

Meanwhile, back in the UK, the economy had stalled. Inflation had surged to nearly 20% and, after the biggest monthly rise in unemployment since the war, the jobless total surpassed two million. A lead story in The Times remarked that "Unemployment is now rising by one person every 30 seconds, around the clock, seven days a week." Satisfaction with the Thatcher Government was low and sinking further.

It was against this backdrop, that (We Don't Need This) Fascist Groove Thang was recorded. Indeed, the lyrics explicitly mention Reagan: "Democrats are out of power Across that great wide ocean Reagan's president elect Fascist God in motion". When the single was released in March 1981, worried BBC lawyers thought it might provoke a libel suit from President Reagan if the broadcaster played it. The song was promptly banned by Radio 1.

The song contains a polemic against right-wing extremism. The first verse leaves the listener in no doubt: "Evil men with racist views Spreadin' all across the land Don't just sit there on your ass Unlock that funky chain dance". A chain dance being a form of hand-in-hand dance. The next line was "Brothers, sisters, shoot your best". Although totally unrelated to the song, Ronald Reagan was shot and seriously injured in an assassination attempt on 30 March 1981. Still, we can imagine the self-congratulatory sighs of relief from the BBC lawyers.

In 1993, after Democrat Bill Clinton defeated the incumbent Republican Present George Bush Sr, the song was remixed by The Rapino Brothers. In fact, the Italian producers cut a completely different version including a new vocal and tweaked the lyrics in the third verse: "Democrats are back in power Across that great wide ocean Bush has proved you can't elect Fascist God in motion". It was a neat contemporary twist that worked well with the reworking of the music, but the target of the lyrics remained the same.

Yet the original song was a curious mix of hip-hop humour and funky word play. Synth player Martyn Ware told Songfacts: "We wanted to do something that was funky because we loved the funk... There was a magazine called Record Mirror in the UK that had a dance chart, or a disco chart as they called it in those days... We looked at all these titles because we loved the terminology. It was all very mysterious to us with hip talk, slang." If you looked at look at a disco chart in 1980 you would have seen titles like "Shakit" (Brass Construction),"The Groove" (Rodney Franklin) and "Funky Town" (Lipps Inc). Similar words worked their way into the lyrics, such as "Shake that fascist groove thang (shake it)" and "Hitler proves that funky stuff It's not for you and me, girl".

The song was written by Ware and Ian Marsh, formerly of The Human League, who first formed The British Electric Foundation and then teamed up with singer Glenn Gregory to form Heaven 17, named after "The Heaven Seventeen", a fictional group in the dystopian novel A Clockwork Orange. The mix of synth, funk and politically charged lyrics still make the track sound unique even today, and Gregory's vocal performance is quite extraordinary: he sounds like an agitated android with its battery beginning to run low.

A footnote: the second verse begins: "History will repeat itself" and in at least one respect it has. In the 2016 Presidential Election, Republican Donald Trump re-used Reagan's campaign slogan: "Make America Great Again". And that's all we'll say.

We hereby instate (We Don't Need This ) Fascist Groove Thang by Heaven 17 on The Wall as No.10 Best Single of 1981

By 1981 punk as we knew had died out but its ethos was living on in the guise of a synth-funk, pop song with a biting, anti-facist rhetoric!Dave B 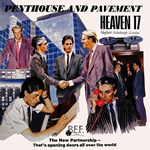